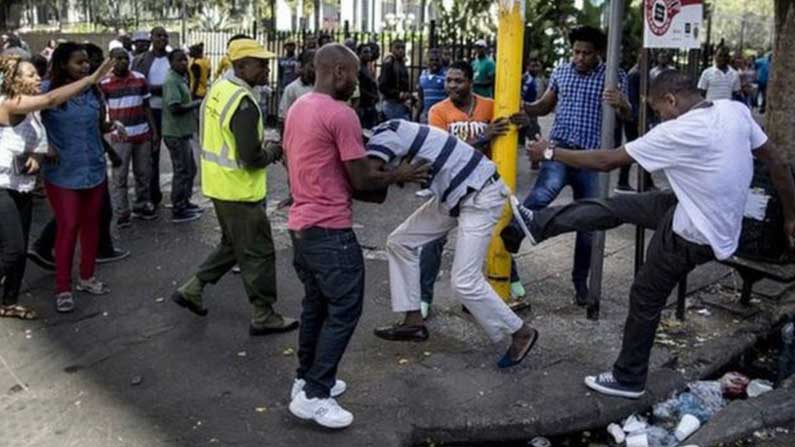 The latest round of attacks which started in Pretoria, spread through Johannesburg’s Alexandra township and other parts of the country.

Businesses belonging to Africans were either razed down or looted. Many foreign nationals of African descent have gone into hiding for fear of being attacked.

Attacks by South Africans on fellow Africans is now a regular occurrence. The South Africans have posted several hate clips on the social media accusing the foreign nationals of drug, trafficking, prostitution, ordering them to go and fix their countries rather than coming to spoil South Africa.

Their President, Cyril Ramaphosa has posted a clip on twitter with the usual line of condemnation of these attacks. Hear him. “There can be no justification for any South African to attack people from other countries. Attacks on businesses run by foreign nationals is something totally unacceptable, something that we cannot allow to happen in South Africa.”

He is talking as if it has not been happening. The attacks he is condemning did they happen in the moon?

As usual African governments issued warnings to their citizens over the violence. The African Union on it part issued a statement condemning the “despicable acts” of violence “in the strongest terms.”

In the wake of the attacks, the Nigeria’s Foreign Affairs Minister Geoffrey Onyeama blew hot with a vow that his nation’s response would be “decisive.” When that decisive response came, the Minister told a press conference that his compatriots affected by the attacks should be compensated. Onyeama boss, President Muhammadu Buhari did not fair better, all he did was send a special envoy to South Africa to convey his concerns to President Cyril Ramaphosa.

It is now clear that the carrot approach to the excesses of the South Africans can never stop these recurring attacks, what is needed according to some diplomats is for the rest of the continent to isolate the former apartheid enclave. One Senator in Nigeria Ike Ekweremadu, went as far as urging the Nigerian government to cut diplomatic ties with South Africa. Perhaps that would cause a reawakening in Pretoria.